Robotics for businesses: 8 lessons to help you succeed

Accelerating robotics, from the starting hole to leveraging it’s much desired potential, could seem straightforward. The technology is non-intrusive and operates at an interface level. Robotic process automation (RPA) has found its place in Azets, but the road to this point was littered with pitfalls and eventually valuable lessons learned. This article sheds light on 8 cherry-picked learnings that could help your business hasten the robotics journey to a more comfortable place:

After countless auditorium presentations, workshops and slideshows I can comfortably advice robotics journeymen to demonstrate robotics in action to sell an understanding to employees and buy-in from board members. Communicating what new technologies are and how it can be applied in the company quickly becomes convoluted without concrete examples and demos. Demonstrating robotics in action on an old familiar process instantly sprung curious thoughts and suggestions for new potential automations from process performers and board of directors alike. As mentioned, robotics is a non-intrusive automation software at interface level. Leverage that advantage to increase acceptance.

Moving workload from employees to a robot that performs the same process for a fraction of the cost stimulates promising business cases.

Let me elaborate. Initially, employees will not have a clear understanding of what processes are suitable for automation and how to work alongside automated parts of their process. Additionally, robotics developers rely on business employees know-how to build robust solutions, handle exceptions, and to ensure data in/output in the format that the business requires. Starting out by targeting processes with the highest potential return without the understanding and know-how is perhaps an obvious trap to avoid, but easy to fall into in order to justify investments.

By steering away from the business cases and focus on quick wins, a seed is now planted, demonstrating how robotics could work in the business without tardy reorganizing and extensive roll-out plans. It instead provides the much needed aha-experience. Apply business cases after robotics has matured within the organisations to enjoy the full potential.

3. Go wide before you go deep

Robotics vendors and companies well traversed in the field of robotics urge businesses in their RPA commencement to focus less on pilots and entirely steer away from drilldowns in favour of spreading small robotics initiatives wide across the organisation. Determine key performance indicators to measure, and a plan to act on if it works.

In contrast to a single proof of concept or pilot that failed – ok what did we learn, are we giving up on RPA now? Refrain from automating entire workflows in one go, concentrate on smaller tasks in different domains to learn the tool and to evaluate what RPA can leverage for you. It’s likely that robotics process automation isn’t suitable for all your business processes and hence a failed pilot or proof of concept could paint a misleading picture. Starting out, investigate processes for automation that are repetitive, rule based and encompass limited variances in how the task is performed. Suitable back-end processes such as form filling, registering new customers in a CRM system, file transfers or file import/exports would make for a good starting point.

Detailed process knowledge fade with automations over time and possibilities to rectify errors diminishes. Properly documenting the process before automation could serve as backup if RPA fails and requires human intervention. Robotics process automation does not remove the process as seen with successful system integrations, but rather perform the very same process automatically behind curtains.

The speed and arguably fragile nature of robotics process automation demands clear responsibilities to manage challenges and dictate ownership. The most predominant concern can be summarized with a quote from an RPA veteran, Nikki North, Co-operative Bank; “what happens when RPA fails, who’s responsible?” (North, N., Nordic RPA and Cognitive Congress, 2017). A few companies appoint robot owners, however, I’d argue that business managers or operatives shoulders responsibility for their processes and henceforth have a plan of action if RPA jobs fails to deliver on expectations.

Business operatives know their processes and are ultimately the customer of an automated process, working alongside it, making them the best equipped to deal with RPA failures.

In addition, having business managers or operatives responsible for automations in their workflows, help reduce ugly scenarios where automations are implemented without process- owners and performers awareness.

Delegating the responsibility to a robot responsible or an IT department will likely increase lead times to rectify problems due to insufficient process knowledge, access rights and longer distance to the customer. Another reason to entitle business with ownership is to understand the impact automations have on the business processes – determining risk versus reward in automating a given process and evaluating the impact of it.

As robotics process automations scale up, business managers needs to readjust resources to reap the benefit of the freed up time which was largely overlooked amongst offshoring companies. Robotics process automations share similarities with offshoring, essentially moving time consuming and repetitive task to a more cost efficient task performer. If each employee were responsible for monitoring their automated processes, the financial benefit of an automation could easily be devoured by new monitoring responsibilities as seen with companies that offshore processes.
Hence, I’m an advocate of centralizing monitoring of robotics process automations to one or a few employees that previously performed the process. It’s a step towards cost efficient scaling and to enable rapid responses from an employee with access and know-how.

7. Go easy on the governance

Evidently, throughout all robotics conferences I attended, robotics speakers have underlined the importance of getting started. Comments such as, “RPA is all about speed or else you lose ROI.” and “Are we fast enough?” were frequent and it all boiled down to removing tardiness. Governance constitutes an important purpose to facilitate communication and decision making but plays a central role first after the initial months of implementations when robotics has matured within the organisation. Initial governance and delivery models should opt to get from A to Z with speed. Too much governance will delay early lessons learned and organisations may lose return on investments entirely.

Few companies incorporate robotics into current governance models to not reinvent the wheel and to keep managers informed.

However, it could be argued that robotics should initially be treated as its own unit to reduce the number of decision makers. This change will grant speed but comes at the expense of some transparency towards managers. Consider more rigid governance when robotics transitions from projectform to daily operations.

8. Prepare for artificial intelligence with robotics

Robotics serves as the enabler to overcome repetitive business processes in cumbersome legacy systems today, but who needs robotics when artificial intelligence becomes affordable and automates entire industries in the near future as?

To illustrate a hypothetical scenario; a machine learning or optical character recognition tool would structure varying supplier invoices from several formats into one format based on business rules, henceforth, the robotics tool reads the now structured invoices into a financial system.

To enable this future, it’s important to have a modular robot-platform to incorporate tools such as machine learning, optical character recognition, and virtual assistance in preparation for future transitions. 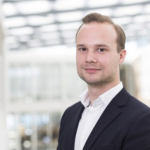 David Månsson works as Nordic Project Manager at Azets. He is currently managing the robotics process automation setup for Azets. Previously, David has worked as a management trainee in Visma, with software development at Ericsson, mobile application development at IBM and in B2B sales. David has a Master of Science in Information Systems from Lund University, Sweden.

Being a UX designer in Azets – A Case Study

Why data is not the new oil